I use a fairly basic cover art questionnaire, built after my experience working both in publishing and with private clients. After a lot of trial and error, I’ve found the questions and phrasing that gives me the info I need from a client and gives the client a say in all the important areas.

Thus far, my clients have all been fantastic and fill in the questionnaires with ease, but occasionally someone asks me if it’s filled in sufficient or if there’s “too much”. Here are a few tips to keep in mind when working with an artist on your cover.

Depicting large scenes or multiple characters (say, more than three people) makes the cover lack focus and it’s not visually appealing. Gone are the days when the customer will only see your cover on store shelf in a large size; a lot of the time now, they’ll primarily see your cover’s thumbnail on Amazon, B&N, and the like. A complicated cover with a lot of detail and fancy fonts will be difficult to read when sized down. Generally, that means large crowds are out (unless you want silhouettes of, say, zombies in the background). This also makes ensemble casts a bit challenging on a cover; focus is important.

Character ethnicity is important. Overall tone and feel is important. Often the small details, however, are not. Your artist is likely working with stock photos, and unless she’s also a photographer, she is limited in terms of what’s available to her (and depending on what you’re paying; I charge $75 – $125 for a front cover which means I’m using less expensive stock, because stock often runs in that range for one photo and it’s not cost effective for what I charge to use those photos).

The model’s toenail polish might not be exact. Or her nose might not be long enough. Or the generic city background might be New York rather than Detroit. But unless you’re willing to pay thousands for a custom model to be hired or for an artist to paint a custom image, there are a few areas you’ll have to accept won’t be exact.

3. Be aware of stock limitations.

In the same vein, this means that the less mainstream or conventional you want to go, the more limitations you’ll have. Any artist can absolutely work within those limitations, but it’s worth browsing stock sites yourself to get an idea of what’s out there. For example, I’ve done covers for three different authors who write full-figured heroines–which is very important representation that I support 100%–but finding images suitable for a romance novel cover presents a challenge. As an author, it’s important to be aware those challenges exist. Interracial couples also have challenges, and let’s not even talk about the ridiculous stock out there featuring Asian women.

4. Be aware of artist limitations.

I can recolor a lot in an image. Take the Heir to Kale cover, for example. The silver background is recolored, the fantasy land at the bottom is recolored. The model herself was redone completely, from her eyes to her dress to her hair painted from scratch.

But the more you want to change, the more obvious it’s going to be in the image. It is very hard to stick someone else’s head on another body (I can tell covers with this done a mile away, and while it won’t turn away all readers, I for one roll my eyes and go to the next book). It is very hard to stick a lot of people in a scene who don’t belong there–lighting, tone, and perspective all have to be taken into consideration. I don’t want your cover to look like crap so while I could attempt these changes, I am unlikely to because being exact is not worth making the entire thing look terrible (see point #6 below).

5. Consider what’s really important to you.

You likely have strong feelings about cover art–dealbreakers for you, the author. This is absolutely something to let your cover artist know. Maybe you don’t want your female characters over-sexualized, or a cropped torso, or that a person of color isn’t whitewashed. A good artist is going to respect the areas you don’t want to budge on.

When it came time to do my own covers for one of my series, I struggled a lot with how to represent both the stories and characters. Ultimately I decided that representing ethnicity was more important than fixating on a traditional, ass-kicking urban fantasy cover, or worrying about the character’s hair being exactly right, etc. Finding an Asian woman with a weapon who looked like she was going to kill you was more important than finding an Asian woman with short hair; finding an African American woman who was non-sexualized was more important than just picking a random woman with a katana. You have to often weigh what sacrifices you’re willing to make vs what you won’t budge on, and your artist should respect this. Always mention this in your cover art questionnaire. 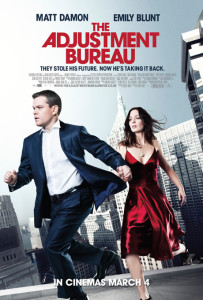 This is, often, what a cover comes down to.

The purpose of the cover is to catch the customer’s eye and encourage her to read a little more about the book, where you the author then hook her with your words so she makes a purchase. As such, it’s more important for the overall cover to look appealing rather than it is to represent every small detail exactly.

I often think of the movie poster for The Adjustment Bureau. If I recall correctly, Emily Blunt’s character doesn’t wear a red dress like that throughout the entire film, however, it makes for a very striking image and draws the eye more than a navy dress would have. Sometimes the artist will make this choice with your cover and it’s important to be open to it.

In my cover art questionnaires, I offer a spot for authors to link me to stock they think would work as well as any existing covers that have a similar “feel” as what they’re looking for (with the understanding I will not necessarily use the stock, and I will NEVER copy someone else’s design). Both give me a sense of what you’re visualizing but you don’t necessarily have to fill in these areas. That being said, it is generally not a good idea to try to design samples of what you want or send mockups, at least with me. It amounts to micromanaging and stifles creativity. You’ll receive a far better cover from your artist if you give them room to work.

These are just a handful of things to keep in mind. You’ll get the most from your artist by understanding the process and being flexible; the artist works best when she has a clear idea of what’s important to you without being rigidly boxed in. And when in doubt? Ask.